So, longtime no post. I know, I’m horrible. I’ve just been busy.

But, here’s some press about what has been keeping me busy!

“”You have to find a part of yourself where I’m not important,” says Coon’s flawlessly accented and (thanks to costume designer David Hyman) arrestingly attired Annie, employing just the right blend of vulnerability and ice, of lovable and never-knowable, “or you won’t be worth loving.'” – Chris Jones, Chicago Tribune

Another Heddatron feature! Read the article from TimeOut Chicago!

After over 5 months of preparations…

That’s us! In the NY Times! In print!

We sold out our first preview, so go to the Steppenwolf Website to buy tickets so you don’t miss it!

Alright, so I’m really due for an update – and I promise there will be one!

But in the meantime…

PUNKPLAY is #3 and CHERRYWOOD is #7

Congrats to all of my wonderful collaborators on those awesome productions!

“Both Ms. Haberle, who looks as if she stepped right out of an Edward Weston photograph, and Mr. Maher, aptly wild-eyed and seedy-looking, are admirably committed to the material” – Christopher Isherwood, New York Times
“David Hyman’s costumes—a long blue dress and then a white shift for Orange, frayed workclothes for Hat, a dirty shift for Grace—suggest the distant time and the characters’ decay.” – Heather J. Violanti, NYTheatre.com

Greg wrote punkplay… which this play is nothing like.

If you’re in NYC or will be, come check this one out – it’s a beautiful script and I’m truly excited to be a part of this project!

Check out the reviews from TimeOut, Chicago Sun Times and the Chicago Tribune!

Here’s a picture. I’m enjoying how untheatrical the pictures turn out.

Some of you may have heard that I’m designing Cherrywood at Mary-Arrchie, directed by David Cromer.
There are 49 actors, no assigned characters and the script is written without any indication of who says what line. What does this mean? It means that the rehearsal and design processes and the execution of the design are happening simultaneously… with 49 actors.

And here’s a pretty picture from rehearsal that Gavin Robinson took. Way to go, Gav. 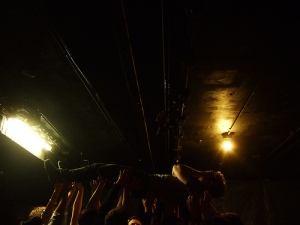 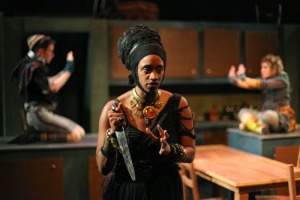 “So much meticulous attention has been given to every detail in performance and design each moment brings new discoveries and revelations. …. David Hyman’s construction of Media’s costume alone deserves an award and Wright certainly wears it well. She may be a killer, but girl knows how to bring the Hoodoo Mama chic!”

“Wright’s own voice has range and richness to match her physical expressiveness – there is flirtatious humor, deep pathos, wildness and wisdom”
“there is tension, cohesiveness and stillness…. here is precision, the promised doom, and four beautiful death-effects in perfect succession. “Medea with Child” may require extreme concentration from its audience, but it is bold, ambitious work, unafraid of making messes, and often spectacular – totally worth the effort. ”

Medea with Child by Janet Burroway is now open and playing at the LaCosta Theatre!

It’s a wild show with a lot of visual spectacle, beautiful language, interesting and challenging ideas and a LOT of mess.

Check it out at www.medeawithchild.com 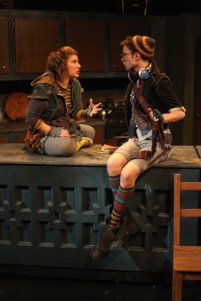